Debuting during the first week of summer, the "Frenchsicle" will be available for a limited time at popup locations in Vancouver, BC, Toronto, ON, and Leamington, ON.

LONDON, ON, June 20, 2022 /CNW/ - This Wednesday, French's Ketchup will debut the "Frenchsicle," its new limited-edition ketchup-flavoured popsicle, to celebrate the first week of summer. Available at popup locations until June 24, the frozen treats are made in collaboration with Happy Pops, a local Canadian business specializing in all-natural ice pops made from real fruit and sweetened with organic cane sugar.

Available in Vancouver, BC, Toronto, ON, and Leamington, ON this week only, the Frenchsicle's savoury tomato flavour is perfectly balanced with a hint of salty sweetness. Made from 100 per cent Canadian tomatoes, it combines some of the best traditions the season has to offer: ketchup and popsicles.

According to a survey commissioned by French's, a majority Canadians (79 per cent) say they like or love ketchup, making it a notable flavour of summertime in Canada. And almost all Canadians who like ketchup (78 per cent) think it's important to buy ketchup made with 100 per cent Canadian tomatoes.

Ketchup is one of the most popular ways to flavour summer dishes. According to the French's survey, Canadians who like ketchup enjoy it most with fries (84 per cent) and on BBQ dishes like hamburgers, hot dogs, sausages (59 per cent). Now they can cool down summer barbecues with the Frenchsicle.

"This year we're bringing the fun back to summer with the Frenchsicle," said Trevor Squires, Country Manager, for McCormick & Company, Canada. "It's exciting to celebrate local food and flavour; from the roots of the Frenchsicle, made with 100 per cent Canadian tomatoes, to our Happy Pops partnership."

French's Ketchup will be popping up to handout Frenchsicles at the following locations:

To honour shared Canadian heritage, for every Frenchsicle given away, French's will donate two meals to Food Banks Canada to address food insecurity in Canada, expanding the partnership that began in 2015. This contribution supports more than 4,700 Food Banks and agencies from coast to coast to coast. Also in 2022, French's is supporting Food Banks Canada's After the Bell program which provides nutrient-dense food packs to children in need through the summer months.

This summer, French's Ketchup is encouraging Canadians to create memories with great food and flavour, especially if it includes the Frenchsicle. To learn more and get the at-home recipe, visit Frenchs.ca. Follow French's and search #Frenchsicle to join in the fun on Instagram and Facebook.

Media Note: High resolution images are available for download at this link.

From 5/5/21 to 5/6/22 an online survey of 1,514 randomly selected Canadian adults who are Maru Voice Canada panelists was executed by Maru/Blue. For comparison purposes, a probability sample of this size has an estimated margin of error (which measures sampling variability) of +/- 2.5%, 19 times out of 20. The results have been weighted by education, age, gender and region (and in QC, language) to match the population, according to Census data. This is to ensure the sample is representative of the entire adult population of Canada. Discrepancies in or between totals are due to rounding.

French's was first introduced to the hot dog – and the public – at the World's Fair in 1904. It was love at first bite. Through the years, French's has become a Canadian staple from the ballpark to the backyard to the holiday table. French's family of products includes Classic Yellow Mustard, Tomato Ketchup, Worcestershire Sauce, Crispy Fried Onions and more. Visit Frenchs.ca for information and recipes.

French's is one of McCormick & Company's (MKC) brands. With over $6 billion in annual sales across 170 countries and territories, McCormick is a global leader in flavour. Founded in 1889 and headquartered in Hunt Valley, Maryland USA, McCormick is guided by our principles and committed to our Purpose – To Stand Together for the Future of Flavour. McCormick envisions A World United by Flavour where healthy, sustainable, and delicious go hand in hand. To learn more, visit mccormickcorporation.com or follow McCormick on Twitter, Instagram and LinkedIn.

Food Banks Canada provides national leadership to relieve hunger today and prevent hunger tomorrow in collaboration with the food bank network from coast-to-coast-to-coast. For 40 years, food banks have been dedicated to helping Canadians living with food insecurity. Over 4,500 food banks and community agencies come together to serve our most vulnerable neighbours who – last year – made 1.3 million visits to these organizations in one month alone, according to our HungerCount report. Over the past 10 years, as a system we've sourced and shared over 1.4 billion pounds of food and Food Banks Canada shared nearly $168 million in funding to help maximize collective impact and strengthen local capacity – while advocating for reducing the need for food banks. Our vision is clear: create a Canada where no one goes hungry. Visit www.foodbankscanada.ca to learn more. 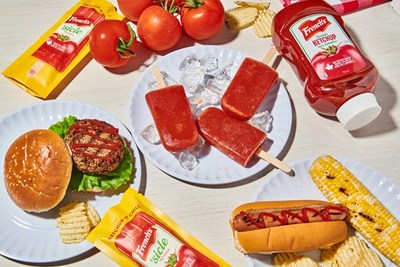 View this release in French here