HUNT VALLEY, Md., Jan. 29, 2020 /PRNewswire/ -- Frank's RedHot just turned 100, and they're celebrating with the ultimate party game of our youth: Spin the Bottle (which also dates back to the 1920s)! In this version, there's no kissing but still plenty of dares, nervousness, and surprises. Fans can participate in the Frank's RedHot Twitter livestream game show, during the Big Game on Sunday, February 2nd. There will be truths, there will be dares, and there will be a lot of chances to win limited-edition saucy prizes. One lucky fan will win the ultimate prize, $1 for every day Frank's has been alive – that's $36,500, if you do the math! 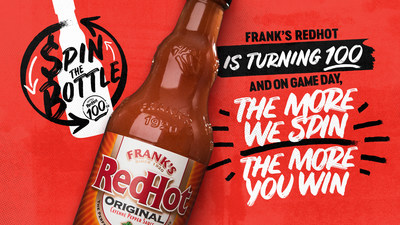 To help celebrate, Frank's reached out to one of their most well-known, well-loved fans, Donnie Wahlberg. Donnie has been "putting that S#!t on everything" for years – just check his Twitter feed. For all you NKOTB Blockheads that ripped pages out of your favorite teen mags, here's your chance to play Spin the Bottle with your crush.

Fans can play live with @FranksRedHot on Twitter at 6:30pm ET on football's biggest day of the year. Frank's RedHot will spin their bottle throughout the event with no shortage of chances to win limited-edition prizes – such as a Too Hot To Handle Candle; a Chicken Wing Bling Ring; an Up in Flames Skateboard; the Hottest Cooler; a [Your Name Goes Here] Custom Frank's RedHot Sauce Bottle and more!

Viewers should respond to prompts using the official hashtag, #FranksSweepstakes. Many winners will be randomly selected live (excluding the grand prize). The more you play, the better your chance to win the grand prize of $36,500.

"During last year's Big Game, Frank's RedHot offered chances for fans to win products seen in TV ads by tweeting emojis. Everyone loved it so much that Frank's drove the most Twitter conversations among brands without an ad, proving that no one simply watches football anymore.  They're checking social media, texting on their phones and monitoring their office pool," said Alia Kemet, Frank's Creative & Digital Strategic Senior Director. "That's why this year we created a bigger and spicier experience, a live game of Spin the Bottle with dares and cool prizes, to keep people talking."

About Frank's
It all started back in 1920 when the first bottle of Original Cayenne Pepper Sauce was introduced. Made with a premium blend of aged cayenne peppers, Frank's RedHot adds the perfect blend of flavor and heat to your favorite foods. Frank's Cayenne Pepper Sauce was used as the secret ingredient in the original Buffalo wings created in Buffalo, NY in 1964. Try our family of products including the Original sauce, Buffalo Wings sauce, Queso Dip seasoning mix, Buffalo Ranch seasoning, Frozen Buffalo Wings and more. Visit www.Franksredhot.com for more information and recipes.

Frank's is one of McCormick & Company's brands. As a global leader in flavor, McCormick has built a portfolio of leading flavor brands that enhance people's enjoyment of food all around the world. Every day, no matter where or what you eat, you can enjoy food flavored by McCormick. McCormick Brings the Joy of Flavor to Life™.